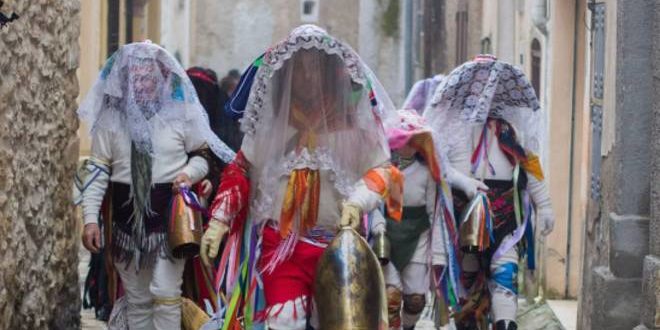 Carnival is celebrated in all Basilicata. Every town has its own unique traditions and way of celebrating.
In Basilicata there are a lot of masked parades, some feature animal bells and happen on the day dedicated to St. Anthony the Abbot (Sant’Antonio Abate), on 17 January, that conventionally marks the beginning of Carnival. The Saint is also the protector of domestic animals.
Here is a list of some of the carnivals that happen in Basilicata.

The famous masked parade of Tricarico happens on 17 January. At dawn, dozens of people masked as bulls (tori) covered in black and red ribbons, and cows (vacche) covered in white and multi-coloured ribbons, enact the transhumance of a herd on the village streets at the sound of their cowbells.
The Campanaccio (the cowbell), instead, traditionally happens in San Mauro Forte the night leading to the day of St Anthony the Abbot (sometimes it happens during the closest weekend). In contrast to what usually happens in rituals involving bells, in San Mauro cowbells are used to create a regular rhythm.
In Montescaglioso the Carnevalone is the main event, it happens on Fat Thursday. The participants wear a costume made with recycled materials, such as paper, boxes and fabric. The main parade characters are Carnevalone, his wife called la Quaremma and his son called Carnevalicchio, a puppet wearing white dresses and “U’ Fus’” that represents the fate.
Made by local craftsmen, Aliano coloured and horned masks are symbols of demonic and intimidating forces, their Fat Tuesday parade is very noisy.
Finally, “Rumit”, a man covered in ivy, is the main character of Satriano Carnival. The week-end before Fat Tuesday a huge Rumit parade, representing a walking forest, walks through the city alleys.

Basilicata is a beautiful land with strong local traditions.
Would you like to discover Basilicata?
Get in touch with us and reserve your room!

This website uses cookies to improve your experience while you navigate through the website. Out of these cookies, the cookies that are categorized as necessary are stored on your browser as they are essential for the working of basic functionalities of the website. We also use third-party cookies that help us analyze and understand how you use this website. These cookies will be stored in your browser only with your consent. You also have the option to opt-out of these cookies. But opting out of some of these cookies may have an effect on your browsing experience.
Necessary Always Enabled
Necessary cookies are absolutely essential for the website to function properly. This category only includes cookies that ensures basic functionalities and security features of the website. These cookies do not store any personal information.
Non-necessary
Any cookies that may not be particularly necessary for the website to function and is used specifically to collect user personal data via analytics, ads, other embedded contents are termed as non-necessary cookies. It is mandatory to procure user consent prior to running these cookies on your website.
SAVE & ACCEPT